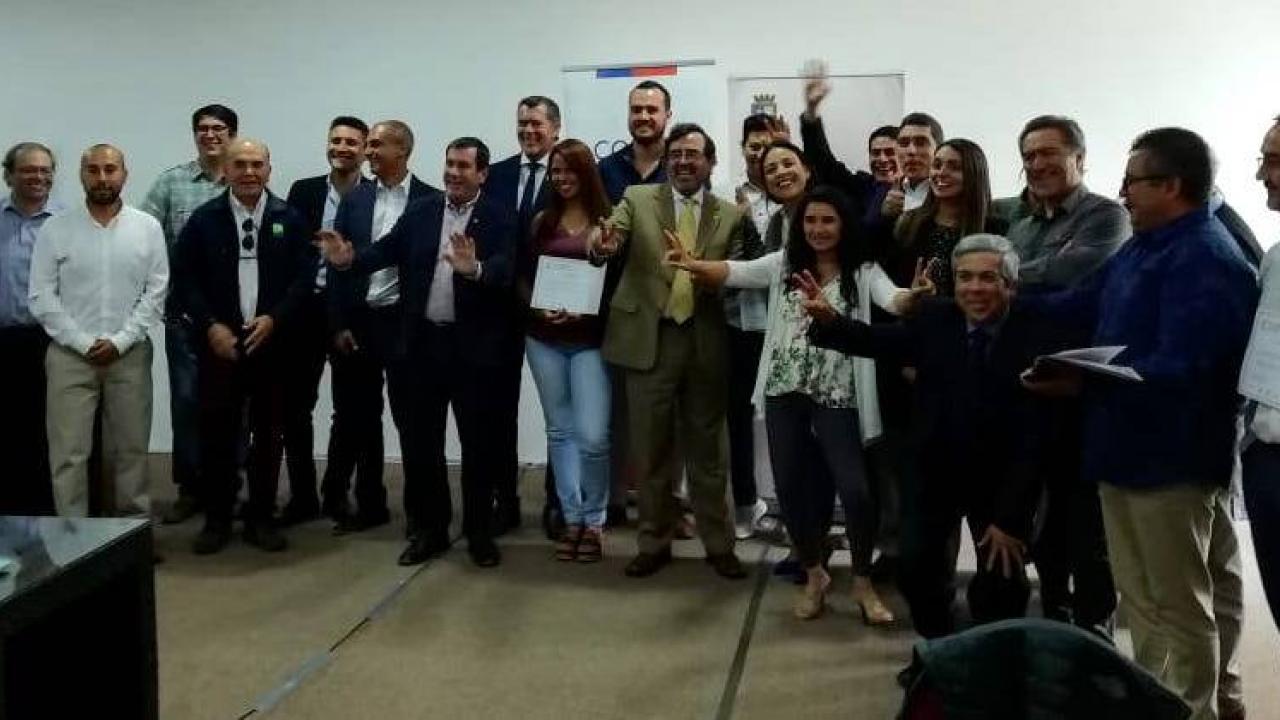 The course “Agricultural Extension Tools for Fruit Farming Consultants from the Region of Valparaiso” ended on February 5 with the graduation of its 20 participants at the Open Hotel in Quillota. Among the authorities assisted Ivan Cisternas, Governor of the Province of Quillota; Juan Fernando Acuna, Director of the Corfo (an agency of the Ministry of Economy) in the Region of Valparaiso and Mauricio Canoles, General Manager of UC Davis Chile. The course was the initiative of the Regional Strategic Program for Sustainable Fruit Farming, financed by the Corfo and the Regional Government of Valparaiso and carried out by UC Davis Chile.

The course, oriented to agricultural engineers and technicians who work as fruit farming consultants for small and medium farmers, extended from 17 December to 1 February and consisted of 20 hours of online classes and 50 classroom hours. Among various presenters the participants had as teachers two specialists from the University of California Cooperative Extension: Mark Bell and Louise Ferguson. UCCE is an institution which since 1914 has been the bridge between local issues and innovative answers through the power of UC research (concretely three of its ten campuses, including Davis).

Mark Bell has more than 30 years of experience in extension: 10 in Mexico (in the International Maize and Wheat Improvement Center, CIMMYT), 10 in the Philippines and more than 10 years at Davis (California). Currently he is Vice Provost of the Strategic Initiatives and Statewide Programs, that is, he is responsible for solving California’s priority and complex agricultural problems which require a transdisciplinary approach joining extension and research. Mark Bell is an agronomist and studied his master’s degree (United Kingdom) and Ph.D. (Australia) in soil chemistry.

During the three days in which he participated in the course, Bell focused on teaching the diagnosis and objectives of the extension initiative, on how to offer sustainable solutions according to the needs and context of the target audience (integration of multiple analysis criteria), on effective communication strategies and extension tools, on the design of meaningful learning experiences (adult education) and on the formulation of an extension initiative (tools for formulation, planning, monitory and evaluation).

“I think that Mark’s participation was fantastic. He has the ability to organize and convey his knowledge of extension and to make us think as well. He has been an enormous contribution to my professional skills,” comments Macarena Pozo, one of the participants in the course. Regarding this initiative in general, Macarena thinks that “there aren’t any spaces for training in extension, so hopefully there will continue to be instances such as this, since after a time it is necessary to reinforce your knowledge.”

“Mark helped us to systematize extension methodology of which despite having notions in terms of the development of the activities and tasks, we did not have the conceptual frame which he gave us. In this sense, I think he is going to help us a lot in the daily work we are developing with small and medium agriculture," commented Fernando Castro, consultor at INDAP (an agency of the ministry of Agriculture), one of the participants in the course.

On January 28 and 29, Louise Ferguson -leader of the California statewide Cooperative Extension (CE) programs for pistachios, table olives, and figs- held an extension clinic; she assessed a vegetable garden together with fruit farming consultants, following the methodological steps reviewed in the classrooms, as well as analyzing the experience and identifying the key points of an extension initiative. Last year Ferguson received the “Outstanding Extension Educator” award from the American Society for Horticultural Science.

The problem of the water crisis: a great opportunity for change

Identify bacteria that potentiate and protect crops in extreme conditions