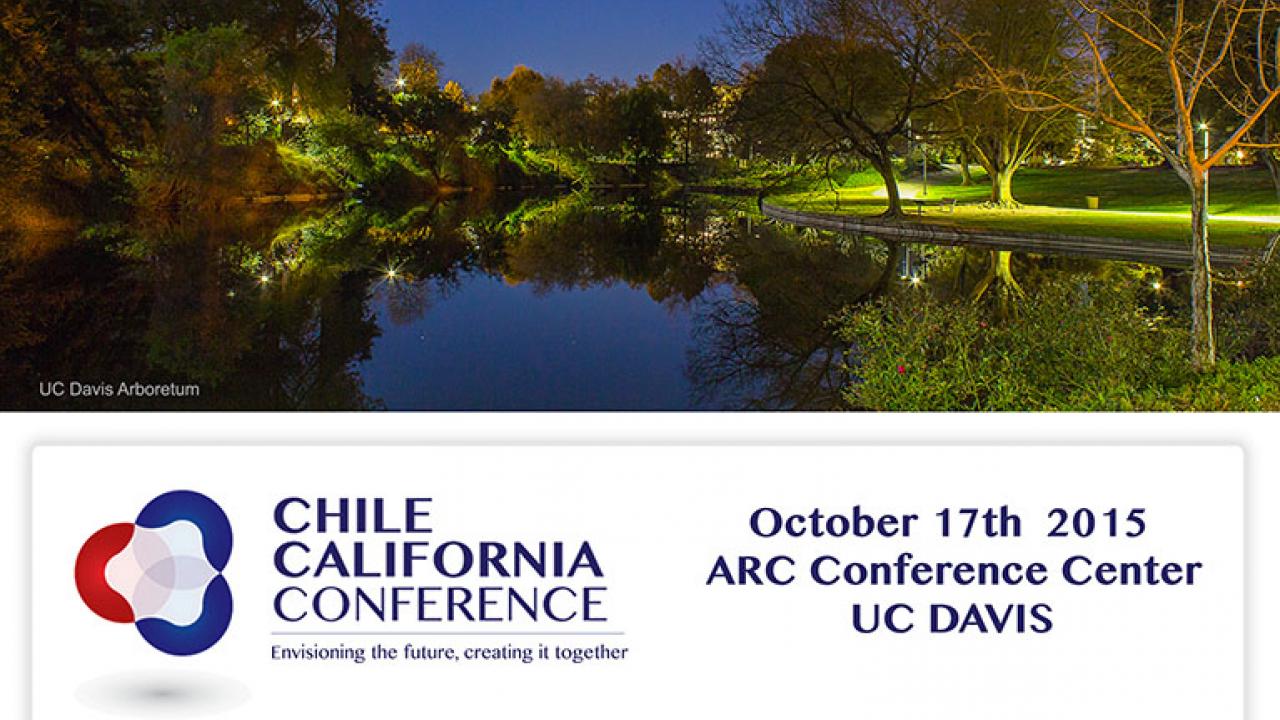 On Saturday October 17th, UC Davis again welcomes the Chilean graduate students from UC Berkeley, Stanford and of course, their own representatives for the fourth version of the Chile-California Conference. Since 2012, these three schools take turns hosting the new generation of Chilean researchers being formed in California; first it was UC Davis, followed by UC Berkley and last year, Stanford. UC Davis itself has 60 Chileans who are either pursuing a masters, doctorate or post-doctorate degree or have positions as researchers or teachers in this university .

The second "round" begins this year with UC Davis as a host and with a new participant: UC Santa Cruz. Under the slogan "Envisioning the future, creating it together", "we emphasize the idea that C3 is a space to think and jointly create a better future for Chile and California, which are similar in many way (see below). C3 is partly the result of the long alliance of scientific, academic and technological exchange between Chile and California ... it is one of the examples that best illustrates the potential, dynamism and the richness of this long exchange," says Catalina Gerstmann, General Coordinator of C3 and Project Coordinator of Public Intellectual Property Resource for Agriculture (PIPRA) of UC Davis.

The C3 program comprehensively structures to highlight the strengths of the participating universities; thus this year the three major issues are biotechnology in agriculture -UC Davis is the No. 1 university in the world for agriculture; forestry and veterinary-; applied technology and innovation -Stanford is one of the leaders in these matters-; and education, where UC Berkeley holds international rankings, among other areas.

In addition, "there will be other spaces in the conference where students, academics and entrepreneurs from all areas can share their research areas and projects with other attendees," says William San Martin, Program Coordinator of C3 and student doctorate in Latin American History at UC Davis.

One of these activities will be the C3 Challenge: the organizers are receiving until October 2nd, ideas and projects that seek to have a positive impact on society and the environment. Those selected will present their initiatives to the C3 audience. The winners will receive an award of USD $250. Together with the project proposal, applicants can send a 90-minute video in English that will compete for the C3 People's Choice and the USD $250 awards. For more information: http://www.cal3.org/c3_challenge.php. Other activities include poster presentations and an exhibition, which will soon post more details on the C3 website.

Organizers also discussed the importance of the sponsors. Since its start, C3 has been sponsored by the Fundación Imagen de Chile, through its network of talents ChileGlobal, the Chile-California Council and the Consulate of Chile in San Francisco. "Each of them, from the beginning have been important actors promoting the alliance between Chile and California, and have done the same for C3," says Catalina. William adds: "This year we are very happy to have another major sponsor, UC Davis Chile, the new innovation center that UC Davis opened in Chile that will certainly play a key role in the future relations between Chile and California."

A bit of history between Chile and California

Chile and California have cultivated a close relationship. Perhaps because they share similar geography: a low costal range and a high mountain range, a rich central valley, a Mediterranean climate and a lengthy coast rich in marine resources. In 1963, authorities in both territories signed the " Chile-California Agreement" promoting technical cooperation and conducting postgraduate studies between Chile and the University of California (UC), in diverse areas including agriculture, education, water resources management and transport. This agreement laid important part of the foundation for Chile's fruit boom, given that several of its national authors were formed at UC Davis and called the UC Davis boys. In any case, the relationship between Chile and California exists since the mid-nineteenth century, during the Gold Rush, 9000 out of the 35,000 habitants of the then small town of San Francisco were Chileans who had embarked in Valparaiso after passing through Cape Horn vessels bound for California.

Getting back to the 21st century, in 2008, President Michelle Bachelet and the then Governor of California, Arnold Schwarzenegger signed the "Chile-California Plan: A Partnership for the twenty-first century". The objective of this agreement was to develop new business opportunities, expand training and research in education, and conduct research and development projects in strategic areas for both territories, including the agronomic sector, such as wine and water resources.

In that same year, Chile emerged the Scholarship program, which among its various resources, funded overseas postgraduate studies for Chileans. Annually, dozens of citizens choose California, one of the most populous and richest cities in the US, to pursue their masters, doctoral or postdoctoral; and the offer is ample, just the University of California (a public university) has 10 campuses, including Davis, Berkeley and Santa Cruz, all who participate in C3 together with Stanford, one of the 130 privates universities in the state and one of the best in the world ranking.