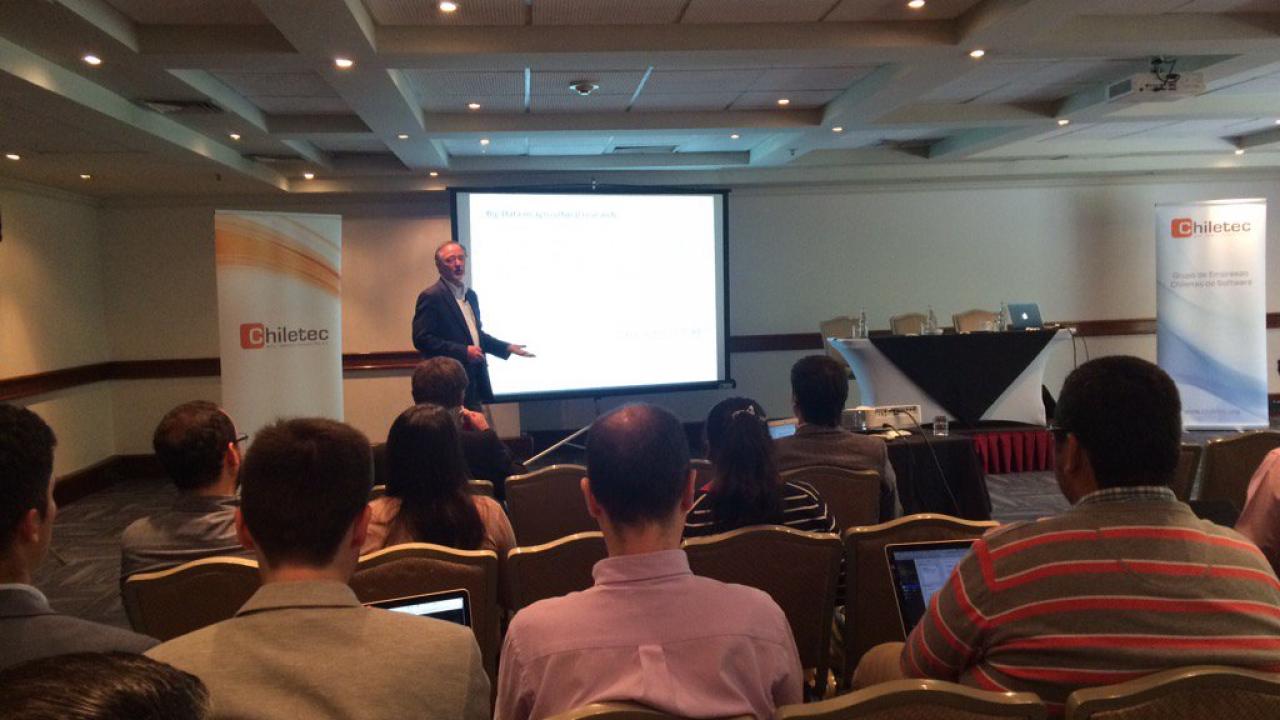 This past Thursday, December 3rd, Dr. Alan Bennett, Executive Director of UC Davis Chile, participated in the 2nd SaaS Generation Seminar. The event is co-financed by CORFO and organized by GECHS Software and AG Services

"Big Data is an area of ​​great opportunity in many places, but especially in Chile because agriculture is progressing significantly. Analytical tools and valuable solutions in Iowa will not be anchored in Chile; they must be developed locally. It is important to take data and utilize it in practical ways, "said Dr. Bennett to attendees. In the presentation, Dr. Bennett quoted Joel Gurin, president and founder of the Center for Open Data Enterprise: "The most important types of big data are those that can make a big impact through what they tell us about society, public health, the economy, scientific research, or any number of other large-scale initiatives".

In the specific case of agriculture, one of the most relevant areas for UC Davis Chile, big data is specially intelligible because of the importance this this discipline: it is responsible for 40% of employment in the world's population, for using 70% of the available fresh water and for 30% of the greenhouse emission of gases, and there are still nearly a billion people suffering from hunger in the world. Not only that- by 2050 agricultural production should double (proportional to the amount generated in 2010) to feed a growing population, a changing diet, and a growing demand.

The Executive Director of Chile UC Davis told attendees that agriculture has already experienced two major revolutions: the Green Revolution that began in the 60s whose purpose was to intensify crop production through improved crops and fertilization. Then in the 90s we had the turn of the biotechnology revolution, which among other achievements enabled marker-assisted selection and better techniques for the development of certain traits in the culture and diagnosis of diseases. Dr. Bennett suspects that agriculture will have a third revolution, Big Data revolution, since it supports two key areas in this discipline: advanced genetic crops and precision agriculture.

The basis for advanced genetic cultures is genomic sequencing, a increasingly faster and cheaper technology. Consequently, the greatest challenge in this area is its accuracy and analysis. UC Davis has sequenced only a vast variety of organisms, from a domestic cat to germoplasmic characterization of a tomato, including the evolution of legumes and the rice genome along with its pathologies.

In our country, UC Davis Chile, along with its partners, the Universities of Tarapacá; Andrés Bello and Talca, and the vineyards Concha y Toro and VSPT- is focused on the genomic characterization of the wine grape germplasm (Vitis vinifera) to understand their environment impact and the practices that impact grape quality.

"The strategy is to sequence the entire genome, of an iconic Chilean wine such as Don Melchor. We can sequence hundreds of individuals. We are looking for unique variations in order to identify closely related individuals, for example, the cabernet sauvignon “said Dr. Bennett. This, to "certify" that a particular variety or clone is exactly what it is expected to be, because often this is determined when the plant is fully grown, and wrongful predictions imply economic losses.

Dr. Bennett also explained that precision farming is another area where big data plays an important role recollecting ground-based sensor information (like the one in a modern tractor and other instruments) and air-based sensors such as satellites and drones.

A practical use of this information is precisely what UC Davis Chile is beginning to develop with vines: cost-effective technologies and tools for measuring water loss and optimizing its use. This presents challenges in the collection and analysis of data, for example, generating a network of sensors and algorithms to interpret the data. At the end of his presentation, attendees asked Dr. Bennett some questions.

Saas (Software as a Service) Generation is a program consisting of 12 workshops and two seminars. Among other objectives, the aim of this initiative is for companies and students to apply this technology to the creation, marketing and scalability of SaaS and mobile applications or web, and to generate networking with companies that are also developing a scalable product.