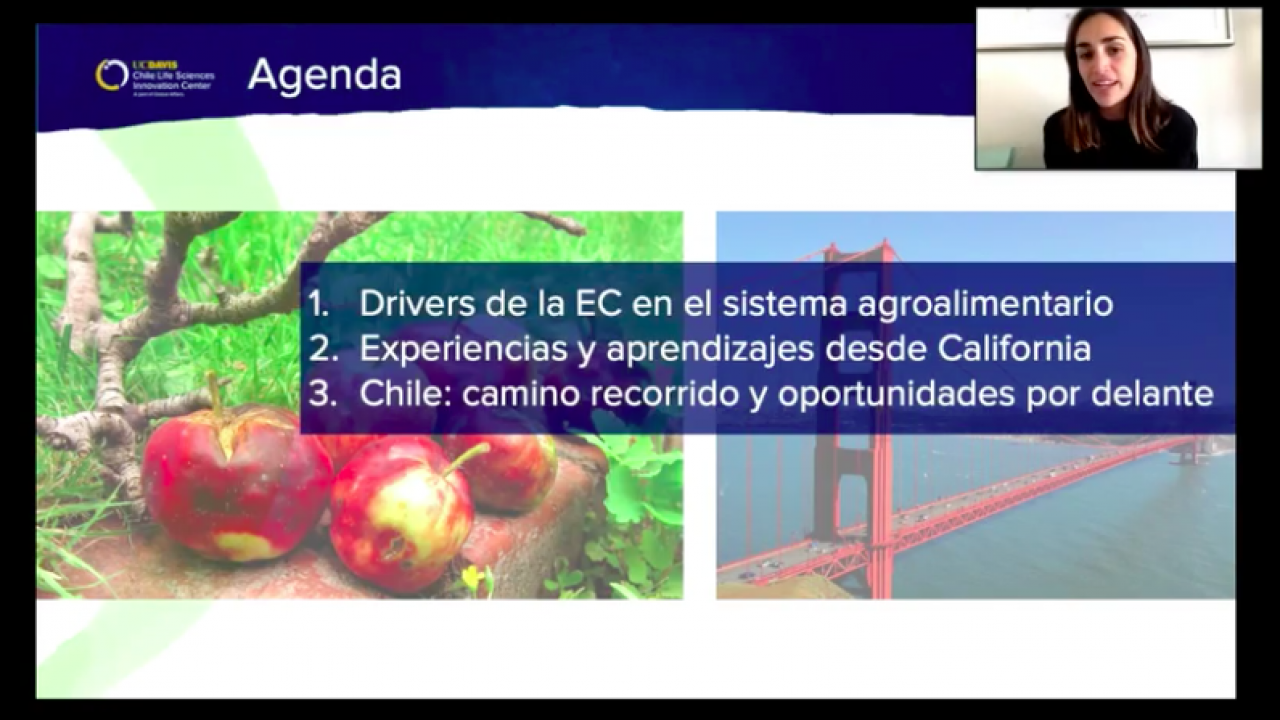 During September 29 and 30, UC Davis Chile was part of the third version of the Expo Chile Agrícola, organized by the Ministry of Agriculture. The activity, which was 100% online, is the largest meeting point for the agricultural sector in the country, bringing together in one place the most relevant actors in the national agriculture, both public and private sectors.

In this version, which was attended by more than 60,000 people and where more than 130 activities took place, including seminars, talks, training, among others, UC Davis Chile set up a digital stand where it provided information on the activities carried out at the Centre, its areas of work, focus, among others, seeking to encourage interaction between academia, companies and producers.

Another of the outstanding initiatives were the talks given by the Centre's team, who presented part of the work of their areas and its relevance for the Chilean agricultural sector.

The first of these talks was held on September 29th and was given by Olivia Valdés, food sciences coordinator of UC Davis Chile, who gave the presentation:

"Circular Economy in the agro-food sector: success stories and opportunities to promote in Chile".

During the coming years, the agri-food sector will face the challenges of increasing productivity in a sustainable manner, making efficient use of natural resources, and contributing positively to the environment and society. In this context, the Circular Economy (CE) emerges as a tool that can contribute in a systemic manner to the sector's addressing of the challenges described, involving the participation and synergy of multiple actors.

In order to accelerate the transition towards a CE, it is essential to bring knowledge and technological solutions closer to the different actors, in particular by making visible success stories that show the benefits of implementing circularity strategies for decision-making.

Another talk was given by Patricio Muñoz, a bioproduct researcher, who gave a presentation:

"Platform of Bioproducts for the Region of Arica and Parinacota", a project we carried out together with the University of Tarapacá in the north of the country.

The third presentation was made by Leticia Rojas, innovation and extension coordinator, who presented:

Extension is a fundamental element for generating processes of change and promoting innovation in different productive sectors, such as the agrifood sector. Among the agricultural extension systems that stand out on a global level is the California Cooperative Extension System, which has been operating for over 100 years, with a robust structure and impact backed up by figures. UC Davis Chile is working on the adaptation of this system to our local conditions, that is, to the social, cultural, economic and productive reality of the country.

The last of the talks was given by Lovell Jarvis, executive director of UC Davis Chile and Mauricio Cañoles, general manager of the Centre, who presented:

"Chile can learn from the experience of California in terms of drought and water scarcity".

The central zone of Chile is facing an extreme drought and the situation is worrying. Reservoirs are low, wells are drying up, some rural communities are trucking in drinking water, livestock are dying and farmers are facing dwindling water for irrigation. Against this backdrop, California's experience in this area could serve the country well.