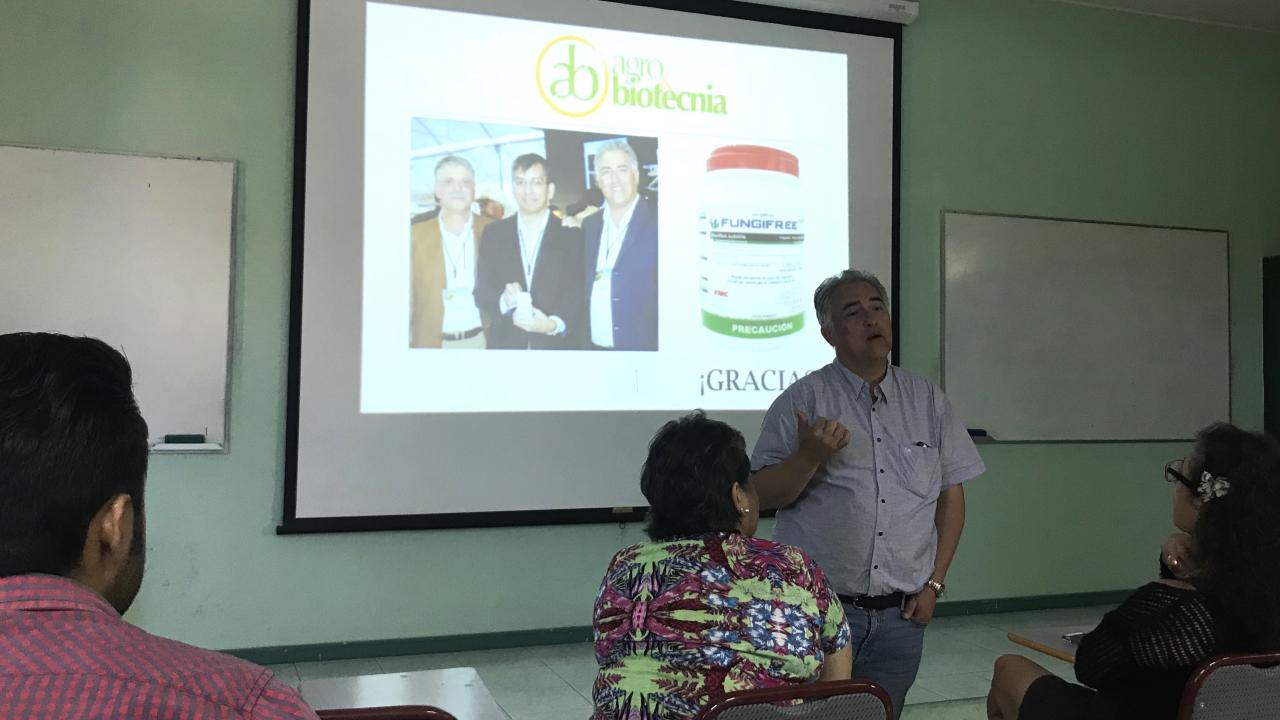 Keeping fruits and vegetables free of fungi which deteriorate these products without affecting its quality or its safe production are the main characteristics of Fungifree AB®. In this way the use of this bioproduct would facilitate the exportation of fruits and vegetables to countries where the use of pesticides is strictly regulated. Doctor Leobardo Serrano, one of the creators of this biofungicide, shared his experience in a lecture and in the course “Escalation of Fungic Fermentations”. The activities were held in the University of Tarapaca of Arica (UTA), within the framework of the collaborative project which this house of study maintains with the University of California, Davis in Chile (UC Davis Chile).

“This was not an easy road.  Mexican researchers had to work for more than a decade in order to be able to begin to commercialize it,” commented to the audience Dr. Serrano (54), who is in charge of the National Autonomous University of Mexico’s (UNAM) Unit of Escalation and Pilot Plant of the Institute of Biotechnology.

During the lecture held in the Campus Azapa UTA, Doctor Serrano explained the development of Fungifree AB®. “The aim of our initial Project was only applied research. The development of the project went from the first studies of basic science up to the granting of the records of use on the part of the Mexican authorities. The above required that the researchers involved had to face the project with a vision more technological than academic which enabled the development to be protected by means of a patent and the creation of a company which finally patented the technology and took the biofungicide to the market,” said the Mexican biochemical industrial engineer.

Fungifree AB® is the first biofungicide developed in Mexico to reach the market and is the fruit of the joint work between public and private institutions. It has been acknowledged by national and international organizations with awards for innovation, such as the 2017 Innovagro Award in the Category of Innovation Technology. In November 2014 it received certification as an organic product.

Doctor Freddy Boehmwald, Head of Research at UC Davis Chile in the collaborative project with UTA, explained the relevance of the development of bioproducts. “The use of chemical resources is exhausted since many vegetable pathogens are resistant to these. In addition to this, consumers in general, as well as the global market, demand food without pesticides or with the minimum possible. There is a complete change around in agriculture,” detailed Doctor Boehmwald, who is also UC Davis Chile’s Bioproducts Development Coordinator.

“Doctor Serrano’s lecture demonstrated that in order to take scientific knowledge out of the laboratory, determination and clarity in their objectives are required. He articulated a need of the industry, in terms of agricultural export, with scientific knowledge and offered a solution to a real problem,” said Doctor German Sepulveda, academic of the Faculty of Agricultural Sciences and Head of Research at the UTA in the collaborative project.  He added: “The visit of Doctor Serrano was tremendously beneficial, since we discussed some key aspects of the process of development of a biopesticide, based on a bacterium with biocontrol activity.”