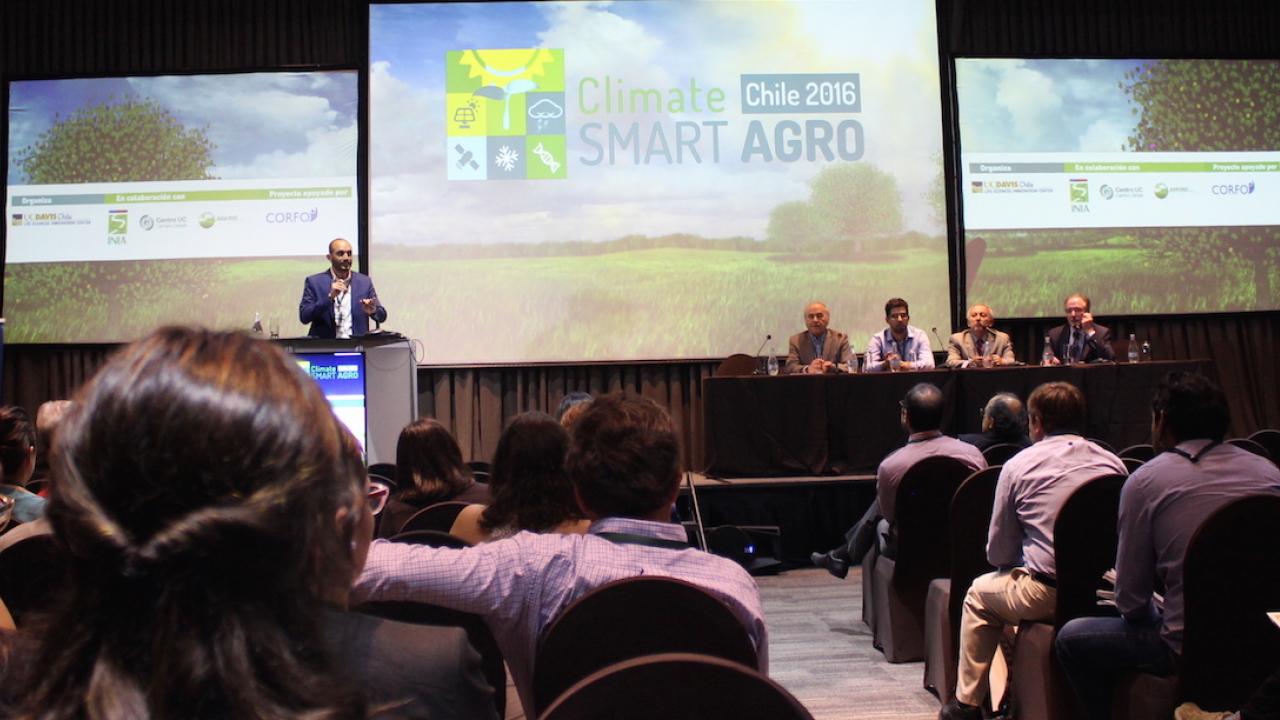 Climate Smart Agro Chile is an annual platform that exhibits science, technology and ventures with an impact on agro-climatic adaptation in Chile. It responds to the necessity of reducing the gap of know-how between supply and demand for solutions to the growing climate vulnerability of agricultural production. Its mission is to promote a technologically advanced, versatile and efficient agriculture facing the range of environments. The event organized by UC Davis Chile had the collaboration of the Catholic University’s “Center of Global Change”, the Institute of Agricultural Research (INIA) and the University of Chile’s Center for Agriculture and Environment (Agrimed).

Prominent authorities were present at the opening of the seminar. The Undersecretary for Agriculture, Claudio Ternicier highlighted the Ministry’s work of adaptation to climate change and above all the support to the small farmers who are being affected.  “We are seeking to generate intelligent climate-friendly agriculture and by doing so, our Ministry has aimed to enhance the confrontation of climate change through a new way of facing the situation of irrigation and research with our services focused on improving the situation of the small farmers,” he said.

Whilst Marcela Angulo, Corfo's Technological Capabilities Manager commented, “The only way to handle the threat and risk, while tackling climate change is by doing things such as this seminar: placing your expertise, talent, the results of R&D and the assets of science and technology at the service of a productive sector who must make better informed decisions.”

On this occasion the Undersecretary for the Environment, Marcelo Mena, was also present.  He stated: “We approve the national strategy for climate change and the vegetation resources which have, as the Undersecretary (Ternicier) said, great benefits. To recover 100 thousand hectares of degraded terrain is really good to capture carbon and also to render our agriculture more resilient. To reforest 100 thousand hectares with native forest is also beneficial for our watersheds. It is good news that progress is being made.”

Climate Smart Agro Chile is an annual platform that exhibits science, technology and ventures with an impact on agro-climatic adaptation in Chile. It responds to the necessity of reducing the gap of know-how between supply and demand for solutions to the growing climate vulnerability of agricultural production. Its mission is to promote a technologically advanced, versatile and efficient agriculture facing the range of environments. The event organized by UC Davis Chile had the collaboration of the Center of Global Change of the Catholic University, the Institute of Agricultural Research (INIA) and the Center for Agriculture and Environment (Agrimed) of the University of Chile.

During the morning the seminar focused on scientific knowledge and the frontier technologies currently available on the phenomenon of climate change and its implications. The presentations were led by Dr. Soroush Parsa, Coordinator of the Programs of Agronomy and Environment of UC Davis Chile. His presentation “What does agriculture require to adapt itself to climate changes?” is the same question he made to over a thousand people related to the world of agriculture. In his presentation he made the first results known on this conceptual map.

Climate change represents one of the greatest challenges to be faced by agriculture in order to continue providing goods and services required by the population. Climate Smart Agriculture emerges as a concept under which productive systems are redesigned. Francisco Meza from the Center of Global Change of the Catholic University announced the advances and challenges in the construction of Climate Smart Agriculture in Chile.

Fernando Santibanez, Director of Agrimed of the University of Chile, explained in his presentation “Chilean agriculture in the new climatic scenarios”, the origins and nature of the potential threats and the opportunities which the new scenarios will bring as well as the role which private companies and the State should play as principal actors in this adaptation process.

The agroclimatic similarity between Chile and California generates valuable sinergistic learning opportunites between both territories. One of these opportunities lies in the search for a climatically intelligent agriculture. In the last century California has experienced dramatic changes in its climatic system such as the severest drought ever registered in its history. In spite of this, agriculture in California has proved to be resilient and versatile to the range of climates with growing rates of productivity and profitability. Alan Bennett, Executive Director of UC Davis Chile, presented the possible causes and technological trends behind this adaptability in “The New Science and Technology of Climate Smart Agriculture” with a view to derive lessons for Chilean agriculture.

All these presentations may be downloaded by clicking here.

In the afternoon, the seminar was attended by lecturers who demonstrated concrete experiences for farmers and companies to face climate change: Luis Sanchez, Principal Research Scientist of E&J Gallo Winery, told about the work they performed with IBM in developing a new system of high precision irrigation; Louis Boddy, group leader of Marrone Bio Innovations, one of the most innovative biopesticide companies in the world and Santiago Gonzalez Venzano, co-founder of S4, one of the fastest growing Agtech start-ups in Argentina (based in the United States) and which offers service providers a geo-referential big data system for field and crop tracking.

In order to see the gallery of photographs, please click here.