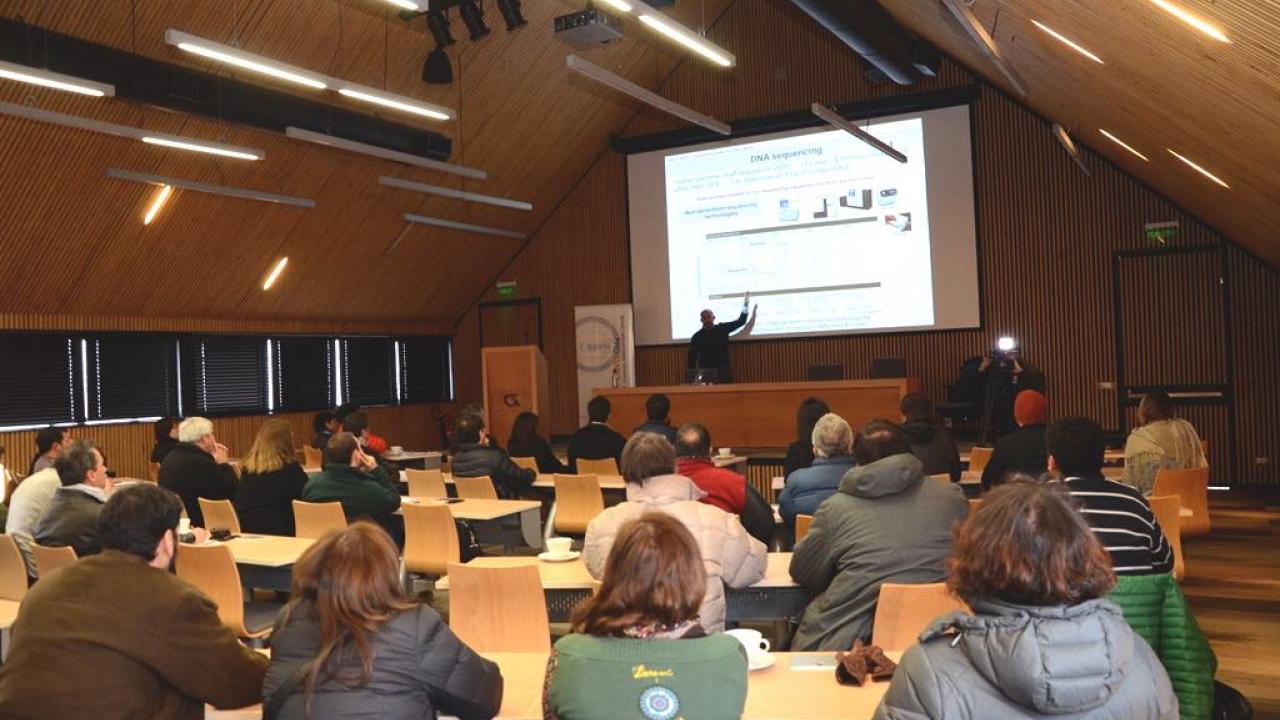 On Friday July 3, Dr. Dario Cantu, Professor of the department of Viticulture and Enology at the University of California Davis, starred in the first activity of "Encounters, Science and Industry". This series of talks organized by UC Davis Chile, seeks to create spaces where research with high potential or that is currently impacting the productive sector can meet. UC Davis Chile has three academic partners- the Universities of Tarapaca; Andrés Bello (UNAB); and Talca and two business: the Group VSPT Concha y Toro. In fact, the presentation was held Concha y Toro´s Center for Research and Innovation, located in Pencahue (Maule) and it was directed by winemaker Gerard Casaubon.

UC Davis Chile is structured in a series of associations, among which a collaboration between UC Davis scientists and national researchers is highlighted. Dr. Cantu leads the U.S research line " Identification of genetic clones of vines and evaluation of rootstocks for the improvement of the Chilean wine industry." His counterpart in Chile is Dr. Claudio Meneses, researcher who leads the UNAB team, and who also attended the talk. In this line, Dr. Patrick Hinrichsen from the Institute of Agricultural Research (INIA) also collaborated. The activity began with the introduction by Dr. Alan Bennett, Executive Director of Chile and UC Davis professor at the University of California. Dr. Bennett highlighted the work of Dr. Cantu, who runs his own plant and microbial genomics research laboratory in UC Davis.

In the first part of the talk, Dr. Cantu made an overview of genomics as a tool and its increasingly frequent use due to its higher capacities and lower costs. If in 2000 the Human Genome Project cost $3 billion and took 10 years to finalize, today the the cost is reduced by 50 percent every five months and in just one night a complex organism can be sequenced. This shows that the current challenges of genomics lie in its ability to analyze and use the information derived from sequencing; Dr. Cantu explained two of his lines of work with this approach.

Cantu, an agronomist and doctor of plant biology, explained to the audience that the genome of an organism can be used as a reference-for example, the Cabernet Sauvignon, to compare it with different clones of the same strain or with other varieties (against a pinot noir or Carmenere, for example). This, finding differences between clones and varieties is not at all an easy task due to the relatively homogeneous populations. This tool is very useful for viticulture because it can characterize a product and make sure it is really what it claims to be.

Dr. Cantu also explained that now not only can we analyze a genome, but mixtures of them, such as the vine and pathogens that coexist with it. This approach is called a microbiome study and investigates all the microorganisms present in a sample and not each part separately. This has a number of benefits due to the large number of pathogens that can not be cultivated in laboratory, separate from the plant . When interviewed by Campus TV of the University of Talca, Dr. Cantu spoke about his collaboration with UC Davis Chile and the Chilean researchers saying "It's an incredible opportunity...to work together on projects that have huge interests for both the Chilean and California industries. And we can also complement our expertise with that of our fellow scientists in Chile."

Cantu also participates in another line of research at UC Davis Chile: Detection of plant pathogens, molecular diagnosis and mitigation strategies. In this case, the counterpart is the University of Talca, an institution that actively participated in the event. For TV note that the university prepared for this talk:
https://www.youtube.com/watch?v=uZwevCk9Z_k
and the press release : www.utalca.cl/link.cgi//SalaPrensa/Conocimiento/9143# sthash.x5udS4Lj.dpuf