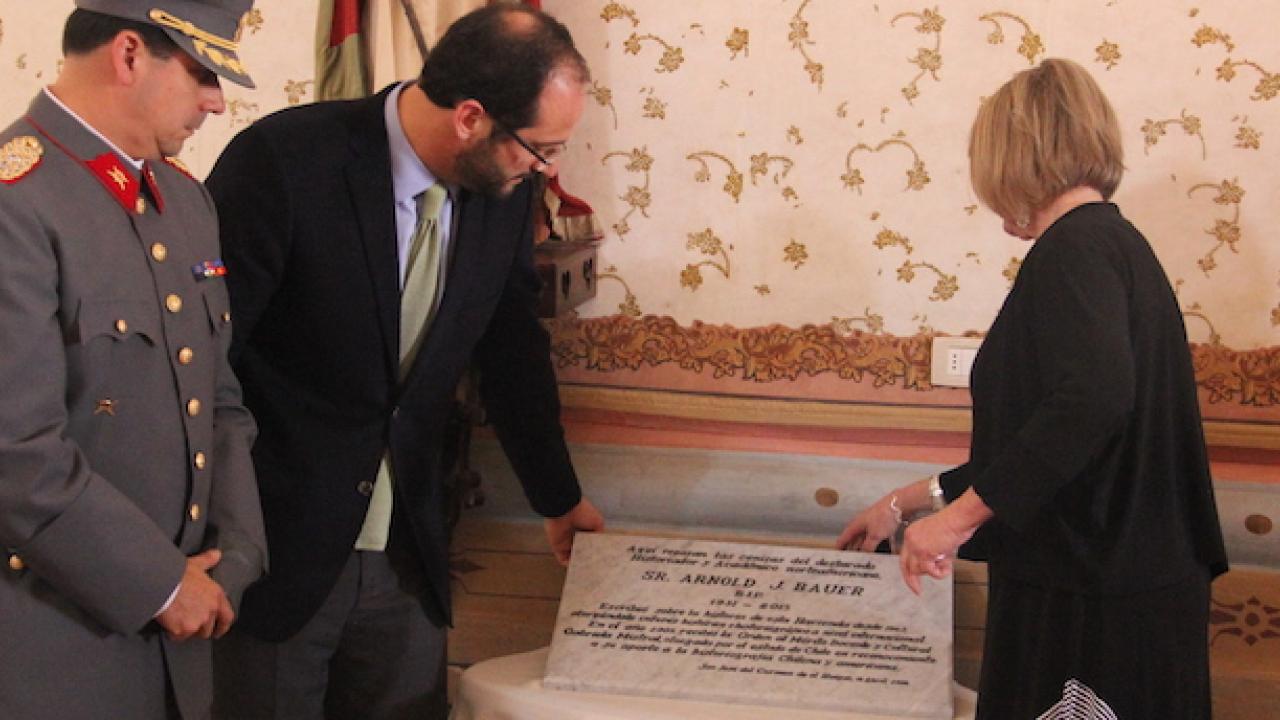 In 1966 Arnold "Arnie" Bauer arrived in Chile for the first time. His goal was to conduct research related to his doctoral thesis at UC Berkeley on Latin American history. Even though he was the son of farmers from Kansas, and had lived in Casablanca (Morocco) performing his military service, San Francisco and Mexico, Chile was the "place he most loved”, as Dr. Bauer says about our country in his exquisite prose of "Chile in the heart" (http://historia.uc.cl/images/stories/publicaciones/ab_con_chile_en_el_corazon.pdf).

There were almost 50 years of close relationship between Chile and the history professor at UC Davis, in which not only friendships arose but also great works, such as the classic book "The rural Chilean society from the Spanish conquest to our days."

This week, "Arnie" returned to Chile: part of the historians' ashes, who died on July 2015 in the United States, were deposited in the church of the Hacienda San Jose del Carmen del Huique near Santa Cruz (O'Higgins Region). This place was key in his research to write " The rural Chilean society."

"Arnie's curiosity was inexhaustible" said at the ceremony the Chilean economist, businessman and politician Carlos Hurtado Ruiz-Tagle, Minister of Public Work of Patricio Aylwin (1990-1994) and friend of"Arnie" since his arrival in Chile.

When he assumed his position at Davis in the early '70s, "Arnie" met Juan Jose Romero, one of the "Davis Boys": Chileans who studied at UC Davis in the 60s and 70s whom then led the fruit boom of our country. "Very broad Spirit," Romero added to the description of Bauer. He filled his speech with anecdotes. Aside from being a "virtuos" bridge player, the historian had two ducks in California who always awaited him after work to then walk home together. So, when Bauer built with his own hands "a bit of Chile in California" following his absence from the country between 1974 and 1989, he began producing his own wine called "Los Patos".

After resetting their academic and emotional connections with the country in the '90s, Bauer starts to spend most California winters in Chile. He drove the creation of the Education Abroad Program (EAP), which functioned on the East Campus of the Catholic University, and became its director in 1994-1995 and again from 2001-2004. Carmen Gloria Guiñez was the permanent academic coordinator of the program. "I know we all have flaws, but I was fortunate enough to not know of any in him" was one of the heartfelt phrases Guiñez said about Bauer at the ceremony.

Also in the '90s, Bauer meets Charles"Chuck" Walker, a colleague at the History Department of UC Davis and current director of the Hemispheric Institute on the Americas, and becomes his "friend, editor and adviser." Walker allows us to know Bauer more in depth: "entertaining, caring, with great capacity to talk." In their 20 years of friendship they had at least one coffee a week. Perhaps on one of these days, Walker made the insightful interview of his friend, titled "Historian by accident" (http://charlesfwalker.com/entrevista-con-arnold-bauer/).

In 1999, Issa Kort, current deputy of Rancagua, meets Bauer while studying history. In 2005 she went to do an academic internship in the History Department at UC Davis and Bauer become her mentor. Kort, who played a key role in orchestrating Bauer’s ceremony adds: “innocent, curious, generous, with a great ability to make friends and cultivate those friendships, plus good singer of boleros, tangos and Frank Sinatra." Arnie knew and recognized Chile, accepted it and made it known," he said.

Such was its connection to our country, that in 2005 Bauer received the Orden de Merito Docente y Cultural Gabriela Mistral, the highest recognition Chile gives to a foreign for his or her contribution to education and culture.

Danielle Greenwood, Bauer's widow, shared with thirty ceremony attendees: "Arnie loved this country," from what he called his "honest food" to the solidarity of its people. She recalled when February 27, 2010, the earthquake surprised them in their apartment in Providencia. Arnie and was already limping and even a neighbor holding a baby waited to evacuate the building together. She also remembers his pain of leaving Chile a few years ago and his difficulty in returning due to health issues. Now "Arnie" returns to his Chilean mood and mode, "not the way he wanted to" recognized by Danielle, but he comes back to rest under a sober plaque that reads: "Outstanding historian and American scholar ". Of course, his loved ones made sure to transcend his professional life and to reconstruct the very own history of this historian.