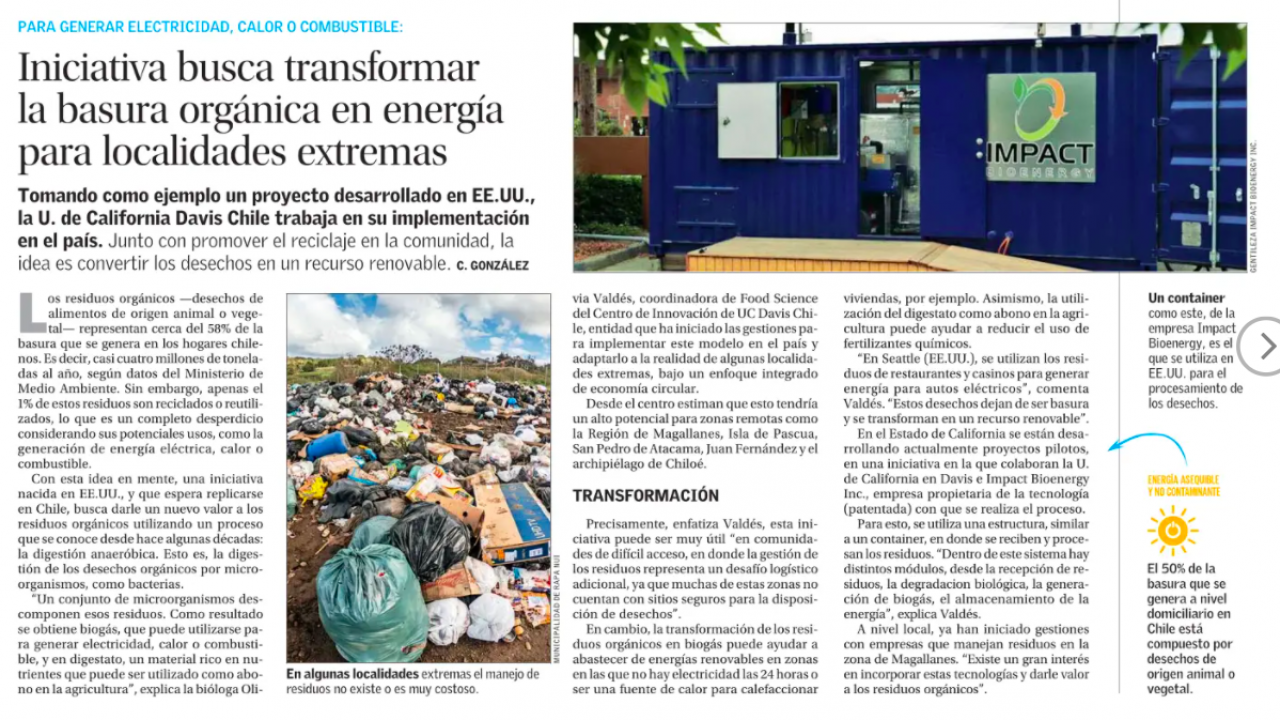 We share the article published in El Mercurio on Thursday, April 8, 2021.  You can see the original article here.

Taking a project developed in the U.S. as an example, U. of California Davis Chile is working on its implementation in the country. Along with promoting recycling in the community, the idea is to convert waste into a renewable resource.

Organic waste -food waste of animal or vegetable origin- represents about 58% of the garbage generated in chilean households. That is almost four million tons a year, according to data from the Ministry of the Environment. However, barely 1% of this waste is recycled or reused, which is a terrible waste considering its potential uses, such as the generation of electricity, heat, or fuel.

With this idea in mind, an initiative born in the U.S., which hopes to be replicated in Chile, seeks to give a new value to organic waste using a process that has been already known for some decades: anaerobic digestion. That is the digestion of organic waste by microorganisms, such as bacteria.

A set of microorganisms break down the waste. As a result, biogas is obtained, which can be used to generate electricity, heat, or fuel, and digestate, a material rich in nutrients that can be used as fertilizer in agriculture, explains biologist Olivia Valdés, coordinator of Food Science at the UC Davis Chile Innovation Center. An entity that has initiated efforts to implement this model in the country and adapt it to the reality of some extreme localities, under an integrated approach of circular economy.

The center estimates that this could be a great opportunity for remote areas such as the Magallanes Region, Easter Island, San Pedro de Atacama, Juan Fernández, and the Chiloé archipelago.

Precisely, Valdés emphasizes, this initiative can be useful 'in communities that are difficult to access and where waste management represents an additional logistical challenge since many of these areas do not have safe sites for waste disposal.

Additionally the transformation of organic waste into biogas could help supply renewable energy in areas where there is no 24-hour electricity or be use as a heat source for houses, for example. Likewise, the use of digestate as a fertilizer in agriculture can help reduce the use of chemical fertilizers.

“In Seattle (USA), waste from restaurants and casinos is used to generate energy for electric cars”, says Valdés. “These wastes cease to be garbage and are transformed into a renewable resource”.

Pilot projects are currently being developed in the State of California, in an initiative in which University of California at Davis and Impact Bioenergy Inc, the company that owns the patented technology used to carry out the process, are collaborating.

“For this, a structure similar to a container is being used receive and process waste. Within this system there are different modules, from waste reception, biological degradation, biogas generation, and energy storage”, explains Valdés.

At the local level, they have already begun negotiations with companies that manage waste in the Magallanes area. There is great interest in incorporating these technologies and adding value to organic waste.