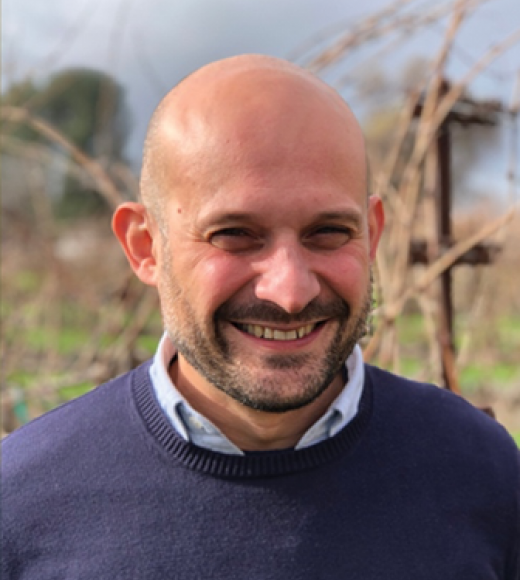 UC Davis Associate professor of systems biology and Louis P. Martini Endowed chair in viticulture. Dr. Dario Cantu was born and raised in Milan, Italy, where he received his undergraduate training and his Master degree in Agricultural Sciences in Fall 2004. He then joined the Plant Biology Graduate Group at UC Davis and obtained his PhD in Fall 2009. During his PhD research under the supervision of Drs. Ann Powell and John Labavitch, Dr. Cantu investigated the molecular determinants of ripe fruit susceptibility to the fungal pathogen, Botrytis cinerea. Since graduating from UC Davis, Dr. Cantu conducted research in the laboratory of Dr. Jorge Dubcovsky where he applied novel sequencing and large dataset technologies to make made significant contributions to the field of plant genomics, including the first epigenome analysis of wheat transposable elements, the first assembly and annotation of the wheat stripe rust genome, a large scale transcriptome analysis of polyploid wheat, and a comparative study of the defense response interactomes in rice and wheat. Since Fall 2012 in the Viticulture and Enology (V&E) Department Dr. Cantu's research integrates principles of systems biology and quantitative genetics and uses genomics and bioinformatics to dissect the molecular networks underlying grapevine responses to the environment, including biotic and abiotic stresses. Research topics range from (i) grapevine resistance to pathogens, (ii) the evolution of pathogenicity in fungal plant pathogens, (iii) berry ripening and its association with pathogens and microbial communities, and (iv) the molecular determinants of fruit development and ripening.

Cantu has deep experience researching and collaborating with UC Davis Chile, wine industry partners, and scientists in Chile for the past several years; most recently leading a first-of-its-kind genetic identification project for the most relevant varieties for the Chilean wine industry, in partnership with Universidad Andrés Bello (UNAB), Concha y Toro, and VSPT Wine Group. He has chaired the UC Davis Department of Viticulture and Enology’s International Relations Committee since 2015, has chaired the Viticulture and Enology Graduate Group since 2017, and was named a Chancellor’s Fellow for Excellence in Teaching and Research in 2019.